The Fair Value DCF is calculated based on the discounted cash flow method. This method takes into consideration all risks associated with financial instruments. These include:

To be more precise, the discount factor at payment date ti used in the calculation of fair value is obtained by

Deriving the fair value using the above formula for the discount factor leads to the calculation of a fair value.

Please find below additional information regarding the following topics:

he market interest rate can be derived from delivered market data such as LIBOR, swap rates etc. Alternatively, it can be imported from front office or market data resources such as Bloomberg, Reuters etc.

The credit spread is the risk premium on the market interest rate which depends on the credit rating of the counterparty. It represents the yield difference between sound government-issued bonds and corporate bonds.

The following situations may result in a change in credit spreads:

The collateral enhancement weighting coefficient (CEWC) determines a reduction in the credit spread of a loan due to collateral instruments and describes the percentage by which the collateralisation reduces the risk of an asset. It is a constant between 0 and 1. For a loan perfectly covered by collateral, the CEWC will be 0. If a loan has no collateral at all, the CEWC equals 1. In general, if a deal is collateralised with p% of its outstanding payment, its corresponding CEWC is (100-p)%.

In order to determine a CEWC, the following approaches can be used:

Example of adjusting the Credit Risk with a CEWC

For the adjustment of the credit risk related part of the DCF the following steps have to be carried out:

Colalteral is valued and the corresponding CEWC is computed in relation to the outstanding payment for the deal:

Adjusted credit spreads are determined as the product of the original credit spread and the corresponding CEWC:

The initial residual spread (InRS) is a constant value which is calculated as a residual amount on the deal conclusion date. The InRS is calculated so that, on the deal conclusion date, the fair value of the deal on the start date corresponds to the cost of purchase, i.e. on the deal start date, the sum of the discounted cash flows corresponds to the cost of purchase. When the “price” of a financial product (e.g. a loan or a bond) is determined by the bank, several components are taken into account, e.g.

Due to the following reason, knowing the InRS is important in the accounting world:

Hence, the InRS can be understood as the profit margin of a deal.

Basically, the idea of the InRS is that it will be calculated only once at the beginning of the lifetime of a financial instrument. However, the following situations can be seen as comparable to the “birth” of a new financial instrument so that the InRS has to be recalcualted:

Example of calculating an InRS

In general, in customer business, the initial residual spread of a deal is determined by the bank and has to be delivered.

If the InRS is not delivered for a deal, it can be calculated by the solution on the basis of the expected cash flows CF(ti) for the deal, the market rates MR(ti) and the corresponding credit spreads CS(ti) and collateral enhancement weighting coefficients CEWC(ti).

To be more precise, in view of the discounted cash flow method, the InRS is calculated so that the mark-to-model fair value of the deal (i.e. the sum of the discounted cashflows) equals its original costs at deal origination date. This is performed by implicitly solving the following non-linear equation with a Newton iteration:

For instance, a concrete situation of calculating an InRS is shown by the following data (columns A, B, C):

Step 1: We calculate the EIR of the deal by performing a goal seek on the sum of the EIR discounted cash flows (Columns D, E).

Step 3: We calculate an "unweighted InRS" for each cash flow (Column I).

Step 4: We calculate the InRS for the deal by performing a goal seek on the sum of the FV discounted cash flows as described by the above formula (Columns J, K)

As a matter of fact, Steps 1 and 3 are not needed in order to derive the InRs of the deal – they only serve as a comparison between the "unweighted InRSs" per value date with the (global) InRS of the eal.

When the full fair value/hedge fair value is calculated using the discounted cash flow method, so-called forward exchange rates are generally required for deals with cash flows in different currencies. The reason for this logical necessity is to carry out netting [1] of cash flows for deals with cash inflows and outflows and then to discount the netted/balanced cash flows on the valuation date. This is of particular importance since the plus/minus sign of the netted amount is used to decide if the credit spread of the counterparty (for incoming payments) or the bank's credit spread (for outgoing payments) is to be used. It is also relevant if it has been configured in the basic configuration that the in/out rule is to be used for the determination of the market interest rate. (See the chapter "In/Out Rule" in the chapter "Calculation of the Discount Factors".)

Taking simple arbitrage considerations into account, forward exchange rates between two currencies can be calculated directly from the spot exchange rates for currencies and the risk-free market interest curves for the individual currencies. 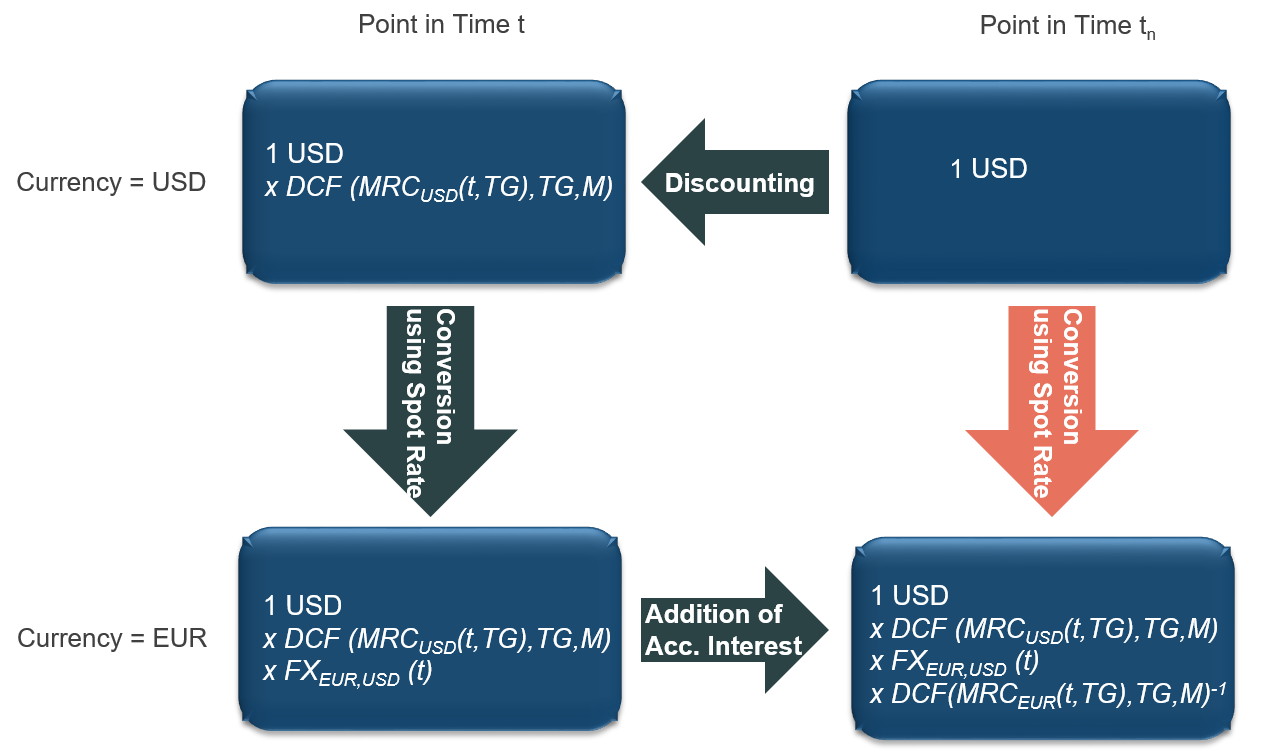 The forward exchange rate is calculated as follows: