The effective interest rate (EIR) for a deal is calculated using the following formula:

Hence, the EIR is calculated by implicitly solving the above non-linear equation. In the solution, this is performed by using a Newton iteration.

The above formula expresses that the EIR exactly discounts the estimated future cash payments or receipts through the expected life of a financial instrument to its net carrying amount.

Example of calculating an EIR

The following example explains an EIR calculation (regardless of the general challenges of EIR calculations and possible effects occurring from changes in deal data).

The following deal data are considered: 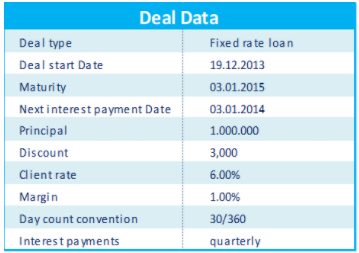 Using the EIR formula, the following equation needs to be considered:

Solving the equation leads to an approximated value for EIR = 6.45264%.