In view of the fact that entities became accustomed to posting interest on the basis of the nominal interest rate, the EIR contains more components that were treated differently in traditional accounting practice: 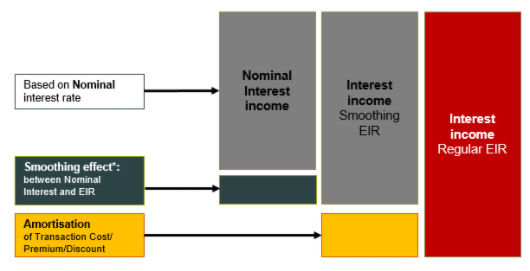 While interest income has to be posted on the basis of the effective interest method, it is still up to an individual entity (with approval from the auditor and the regulator) to interpret the standard. More specifically, an entity has a certain flexibility with regard to deciding how to post the different components as part of the effective interest. During the implementation of the standard, various practices/interpretations have emerged:

Practice 1: Interest income is posted directly on the basis of the EIR. It means that all components of the effective interest are posted to the P&L "in one piece".

While either practice has been accepted by auditors and regulators, and the impact of the difference between these two practices on financial statements can be immaterial, using different practices can have a significant impact on technical performance.

Example of calculating a smoothing EIR

Considering the same sample deal as before, the smoothing EIR is calculated in addition to the regular EIR. Ignoring the inital discount with a value of 3000,  the following equation needs to be considered now in order to derive the smoothing EIR:

The solution to the equation results in an approximated value for EIR = 6.137883%: